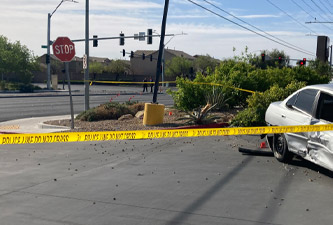 LAS VEGAS, CA (April 11, 2022) – Early in the morning on Saturday in North Las Vegas, a motorcyclist was struck and killed where Ann Road and Allen Lane intersect.

END_OF_DOCUMENT_TOKEN_TO_BE_REPLACED

A retired fighter pilot, Lee Behel, past champion at Reno National Champions Air Races, died in an accident Monday at a heat race at Reno-Stead Airport.

He was competing in the Sport Class in his race plane, “Sweet Dreams”, an experimental GP-5.

The plane had a mechanical difficulty and crashed.

Behel was the only person on the single engine plane.

The crash occurred away from the grandstands where a previous crash had taken place in 2011 in which pilot, Jimmy Leewark, died.

Behel had been participating in the air races for over 20 years.

He was described as talented, enthusiastic, and a compassionate friend.

It is said that he will be missed, “…deeply”.

Thoughts and prayers are with the family and friends.

The cause of the accident remains unknown. It will be under investigation.

The Air Races will continue.

A tribute for Behel is being planned.

Behel was a resident of San Jose, California. He was a retired auto dealer.

If you need an accident attorney call accidentlawyers-nevada.com at 877-722-9777

No comments to show.